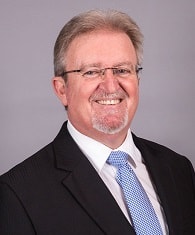 Peter White is the Managing Director of the Finance Brokers Association of Australia Limited (FBAA) and has been heading the business of the FBAA since 2010 originally as its CEO. Peter first started as a volunteer with the FBAA in 2003 as the State President for NSW, then was later voted in as National Vice President then National President and Chairman of the Board of Directors.

Peter’s banking and finance background spans over 41 years where he started his banking and lending background in the ’70’s spending many years in retail banking. He established RAMS Home Loans first sales office in 1993, has held various profile CEO roles in mortgage broking and mortgage management businesses, as well as also held roles as Head of Private Banking, Associate Director of Marketing & Distribution of an Investment Bank, and has run broking businesses and industry consultancy businesses of his own.

As the finance broking sector’s leading voice for industry and non-banking alternatives, Peter spends a large amount of his time with Regulators and Government on specific Industry Consultation Committees with ASIC and Treasury, and with individual Senators and Senior Cabinet Ministers on behalf of the broking sector, as well as being a Registered Lobbyist in his own right.

He also sits on the SBAA’s Advisory Board and Think Tank Committee, is a champion and campaigner for Parents of Special Needs Children through his private charitable Foundation with his wife called The Sanity Space Foundation running much needed support for them with ready access to information, financial hardship support for those in need, and the awareness of issues and lobbying these needs to Government.

Peter is also the leading advocate for Mental Health Awareness in the finance industry.

Why the SBAA Think Tank